Flying is stressful, with juggling expensive airfares, having all the proper documentation ready including an unexpired passport, packing for all kinds of climate scenarios, and the jungle of an airport itself once the big travel day arrives. While not every first-time flier will mistake the emergency exit for the bathroom, there are some common mistakes that newbie travelers frequently make. 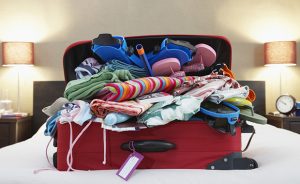 The general rule when you pack for a trip is that you don’t need as much as you think you need. If you don’t think ahead, you could wind up paying crazy fees in overweight luggage at the airport

If you’re not checking a bag, remember that carry-on liquids, gels, and aerosols have to be 3.4 fluid ounces or less and fit in a clear, quart-size bag.

International flights require a little more time at the airport than regular flights, so airlines suggest you get to the airport no later than two hours before your flight rather than the single hour allotted for domestic flights. This is more than a suggestion. If you arrive late and there are any delays in the process, you could end up missing your flight or arriving at the gate too late to board.

4.      Forgetting to check your passport expiration

There is nothing quite like the panic that comes from booking a spontaneous vacation and realizing your passport is expired. Some countries won’t allow you to visit within six months of your passport’s expiration date in case you take an extra-long vacation and they want to make sure you have a valid passport to travel back.

If you’ve never been overseas before, you may not anticipate the dizzying, flu-like sensation of jet lag that occurs shortly after landing. Some jet lag is to be expected, but you can minimize it by sleeping on the plane at a time that would be appropriate for sleeping in the country of your destination. Taking a sleeping pill or herbal supplement like melatonin can help you achieve restfulness on the flight.

6.      Exchanging too much money before you travel

It’s a good idea to have some of the local currency on hand when you land, but don’t overdo it. Too much cash invites disaster if it’s stolen or lost. Figure out your budget and grab some cash at your bank or an airport ATM.

You’re on vacation, so embrace your destination. Try new foods, talk to the locals, explore your surroundings, and dive into your new surroundings.