The world’s greatest airport is about to get even better 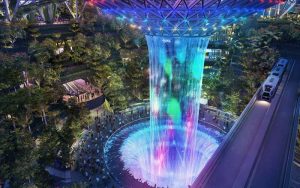 With a hedge maze, tube slides, a 131-foot waterfall and more.

The world’s greatest airport is about to get even better.

The Jewel at Singapore’s Changi Airport will be the world’s first air transit hub with its own on-site amusement park. It is scheduled to open in 2019.

Featuring a five-story indoor garden, hedge maze, simulated clouds, bouncing nets, giant waterfall, and tube slides, the Jewel will help make long layovers not only exciting, but potentially make Changi a destination all its own. (It already is for many aviation enthusiasts.)

The canopy park will be enclosed in an amoeba-like glass and steel structure in front of Terminal 1 and has been designed by award-winning Canadian-Israeli architect Moshe Safdie, most famous for his revolutionary apartment complex Habitat 67 in Montreal. The airport’s new attractions have been designed by a team of consultants from Britain, France, Germany, the Netherlands, Singapore, and the United States. The centerpiece of the Jewel will be the Rain Vortex, a 131-foot waterfall.

Visitors will be able to walk on nets suspended three stories above the garden. And if the views alone aren’t exciting enough, a trampoline-like bouncing net will help get your heart racing.

A new garden maze with six-foot hedges is being created by maze master Adrian Fisher and will have a lookout tower for a bird’s eye view.

The topiary walk will feature larger than life stuffed animals.

Children will be able to play among the clouds in a new attraction designed by San Francisco’s The Exploratorium.

The indoor flower garden will have giant floral sculptures.

While Changi hasn’t stood out for its architecture, it is already beloved for its very unusual amenities. It was named the world’s best airport.

And anyone on a long layover in Singapore or looking to make Changi their final stop will be able to book a room at the Jewel’s new Yotel hotel.