Operation Christmas Drop is a tradition that serves as a training mission for the United States Air Force. It started in 1952. Today, 65 years later it is the longest running humanitarian airlift in the world.

Everything begins with Andersen Air Force Base, located in Guam Island in western Pacific Ocean. In December 1952 state pilots who were on mission south from Guam, saw islanders and decided to share with them the Christmas spirit. The collected some supplies from the board, put them in container and dropped it with a parachute to the islanders.

Every year in December the Air Force of United States take the role of Santa Claus and as the white-bearded old man with his sledge they fly a mission over islands in Pacific Ocean and drop presents – containers with necessary supplies for the everyday. The used parachutes are no longer used for the work of Air Force, but are still capable to endure weights over 500kg.

A witness to the first drop on the island of Agrigan said “We saw these things come out of the back of the airplane and I was yelling: ‘There are toys coming down!'”. At the time the island had no electricity or running water, and on top of all the islands were periodically hit by typhoons. Some of the first containers failed to arrive where intended, and islanders swam out to retrieve some, while others were discovered months later some miles away.

Today this unique Christmas tradition is continued with the donations from the residents and businesses of Guam. Money is raised for the operation by sponsored activities such as golf tournaments and sponsored runs, as well as private sponsors. All of the donations are collected by private organization and the Air Force of United States, they pass sorting and packing in boxes. Each box weighs nearly 180kg (400 pounds) and contains items such as fishing nets, construction materials, powdered milk, canned goods, rice, coolers, clothing, shoes, toys and school supplies.

In 2006 thanks to the mission 140 boxes are dropped to 59 islands. In 2011 operation along with the necessary supplies are delivered 25 boxes of IV fluids to Fais Island (Carolina Islands archipelago). There is local outbreak of dengue fever, which is caused by the denga virus – spread by several species of mosquito. 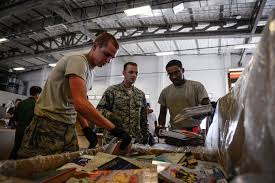 Since 2015, the Christmas drop operation is participated by the Royal Australian Air Force and the Japan Air Self-Defense Force. Both of the countries provided two airplanes  C-130 Hercules to join the three C-130’s of United States.

It is December again. It is time for the islanders to expect Santa Claus with the Christmas presents.

ClaimHelp is a company established and operating with air passengers’ interests as its top priority, educating them about their rights and helping them overcome the hassle associated with flight cancellation, delayed flights and denied boarding.

We will assist you to obtain from the airline, what you are entitled to as compensation end we will end up fighting to protect your rights. Our mission and main goal is to make the air travel a peaceful and stress-free way to get to know the word.

Your trust is our way to success.