The live torpilla – 102 years of immortality

His name is Dimitar Spisarѐvski, but his friends call him Spaich. The Bulgarian fighter pilot with the rank of captain was born on 19 July 1916 in Dobrich, Bulgaria. He is well known for taking down an American bomber by ramming it during the bombing of Sofia in World War II.

He grew up as a tall and excellent gymnast, swimmer, boxer and footballer. From 1933 to 1935 plays for FC Levski Sofia. Besides being a gentleman, the soul of the company, Spisarevski spoke fluent Deutch and Russian, loved singing and writing poetry. On the other hand, his sharp sense of justice, an endless patriotism and manly reactions often brought him dozens of troubles.

“…If I ever see an enemy plane in front of me, I will eat it, I will hit the machine with my own one if needed…”

Spisarevski entered His Majesty’s Military School, but due to his wildly behavior and intolerance to any injustice was subsequently expelled and went to serve in Yambol as a ranker. Due to his excellent conduct, he was called back as a cadet to the school. When a pilot contest was announced, he was among the first candidates for the new subject. Later, he went on to study in Nazi Germany, where he graduated from the fighter pilot school in Werneuchen in 1938. In the summer of 1943, he was sent to the English Channel with another Bulgarian pilot to observe the German pilots and master aerial warfare tactics.

“You will crash and will take down at least one bomber, but you will not let him pass over this holly land and sprinkle it with bombs!”

On 20 December 1943, a group of 200 American B-24 Liberator bombers and fighter planes headed to Sofia in order to bomb the Bulgarian capital once again. 36 Bulgarian airplanes took off in order to intercept the bombers before they reached Sofia. Spisarevski was one of the Bulgarian Air Force’s Messerschmitt Ме-109G-2 pilots on duty in Bozhurishte who were sent to intercept the bombers before they could reach the city.

According to the battle log of the 3/6 fighter wing, of which Spisarevski was part, the battle went the following way: the American B-24 aircraft flew towards Sofia in V-shaped formations of three, echeloned in a long rear column. The Bulgarians formed an opposing battle row, echeloned in squadrons of four in a rear column, at 6,000 m. The wing had the task to engage the enemy P-38 Lightning fighters while at the same time the other wing, 2/6, would hit the bombers and force them to release their bombs outside the city.

Flying Officer Spisarevski’s aircraft failed to start and he took off in a reserve plane with some delay in what would be his first and only aerial battle. When he reached the bombers, the battle had already begun. Spisarevski evaded two American fighters, headed to a group of 16 Liberators and, without ceasing fire, crashed into the leading bomber. The bomber split in mid-air and only the tail gunner survived. Spisarevski’s machine crashed at the heights near the village of Pasarel close to Sofia. Without plan B, without enough fire, flying officer Spisarevski uses the last weapon that was left – his own life, just i order to protect his country.

He is very decently human being and in his behavior there is a lack of pathetic. His last words on 20.12.1943 are very ordinary: “Rotten brats, you even did not let me to eat my beans…” For the taking down of a four-engine bomber, he was credited posthumously with two aerial victories captain (1944) and group-captain (2009). Spisarevski was buried in the Central Sofia Cemetery, in the Walk of Pilots. 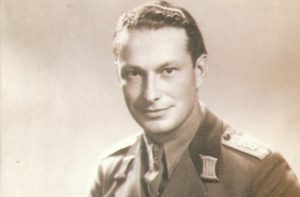