Charles Bridge or Karluv most, one of Prague’s symbols, with its 10 metres width and 516 metres length – an impressive view both during day and night, serves as a link between the old town and the Mala district.

The walk on the Charles Bridge is a must-see on your visit to Prague – except the crowds of tourists, you will be able to see other street musicians, talented artists, souvenir sellers, as well as 30 baroque statues, including that of St. Cyril and Methodius. From 1683 to 1928, several centuries after the bridge was built, these 30 statues of saints were carved to decorate the bridge, the most famous of which is the statue of St John of Nepomuk.

Built between 1357 and 1402 at the request of the King of Bohemia and Emperor of the Holy Roman Empire Charles IV, Charles Bridge is best known for the legends that literally soar in the air.

The legend of St. John of Nepomuk is the most popular and at the same time – a bit gloomy. According to a legend, King Wenceslaus IV was dissatisfied with the fact that John of Nepomuk, then a court priest, refused to reveal the confessions of the wife of King Wenceslas IV, and was thrown off the side of the bridge to his death. On that same night, five stars appeared in the sky above the place of his death, which is why there is always a five-starred halo above any statue of St. John of Nepomuk. Today, his statue is on the same spot on the bridge where his body was thrown. 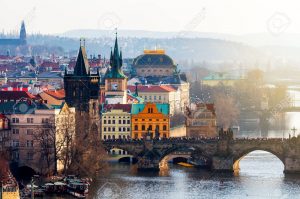 Another version states that St. John of Nepomuk opposed the reign of King Wenceslaus IV and was imprisoned with three other priests. He was tortured, but even the burns of fire failed to break him and make him obey the king’s will. That is why he was chained and taken to Charles Bridge, from where he was thrown into the water and left to drown.

Whatever the truth was, from that moment on, Charles Bridge becomes a popular place and attracts thousands of tourists. It is said that touching the saint’s cross will bring you 10 years of luck, and according to others – you have to make a wish and it will come true. For this reason, there are always crowds of people in front of the statue.

Another legend says that an indestructible sword was buried in Charles Bridge, which would help the Czech Republic in a time of greatest need. You can also see the statue of the man who discovered it – Bruncvík.

It is also said that when Charles IV ordered the construction of the bridge, one of the builders told him that the screed would be much stronger if the lime mortar was mixed with eggs. There was not enough in Prague, so the king announced to all the inhabitants of the kingdom to send as many eggs as possible. However, the people, fearing that the eggs would break until they reached the king, decided to send them hard-boiled! Imagine the result, no wonder that the next day the bridge collapsed and had to be rebuilt.

Another legend says that under Charles Bridge, in the blue waters of the Vltava River, live water spirits – supernatural beings found in the folklore of the Slavic peoples. It is said that they locked the souls of the fallen people in the water from Charles Bridge in their large pots to protect them.

We know from our colorful folklore that in every legendthere is a dose of truth… and yet everyone decides for themselves what and how much to believe.