Sea way: the longest sea bridge in the world

The year is 2018. Chinese people have set another world record, opening another amazing construction facility that impresses with scope, investment and innovation. Of course, there are not one or two of the longest bridges in the world in the country, but what distinguishes this is its distance over the sea.

It connects the cities of Zhuhai, Macau and Hong Kong. The land connection between them is 3 hours away. With the bridge, the time to reach the cities is reduced to the impressive 30 minutes. The length of the bridge is 55 km, 30 km of which are above water, and 6.7 km are in an underwater tunnel so as not to disturb shipping. The entrance and exit of the tunnel are located on artificial islands in the sea. The other sections of the bridge are roads, viaducts and ground tunnels connecting Hong Kong and Zhuhai. 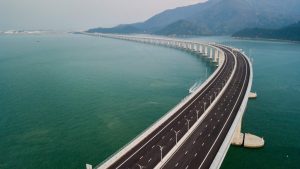 420,000 tons of steel were used in the construction of this offshore facility – approximately the same amount that would be needed to build 60 Eiffel Towers. Its construction takes 9 years, and the amount that goes to its realization is 20 billion dollars. The other thing that impresses the sea bridge is that it is designed in such a way as to withstand earthquakes and typhoons.

Unfortunately, part of the price that had to be paid are human lives – 18 workers lost their lives during construction work and hundreds were injured. In the same part of the sea where the construction is, the characteristic inhabitants – dolphins – are no longer visible. For these reasons, the project has been actively criticized by environmentalists and other human rights organizations.

Chinese President Xi Jinping attended the opening ceremony of the longest sea bridge. This is another step in implementing China’s economic growth plan in these three areas. There is no public transport or railway on the bridge. In order to be used by citizens, a special permission is required, which is issued on a quota basis. All passing vehicles pay a fee. Special cameras are installed. Some of them also monitor the faces of the drivers – with three yawns from the same driver in the control center a warning appears. The other part of the cameras are security and are placed in order to prevent possible incidents and terrorist attacks.