The difference between direct and nonstop flights

While you may have thought the two words were interchangeable, there’s an important difference between “direct” and “nonstop” flights. To avoid any future confusion, listen up.

Nonstop flights take you from one airport to another without stopping. Board the plane, buckle your seatbelt, and the next time you touch ground you have reached your destination.

Direct flights, however, don’t offer the same convenience. Instead, “direct” means that the flight number doesn’t change, even as the aircraft may make one — or more — stops.

As pilot Patrick Smith wrote in “Cockpit Confidential,” a direct flight “is a carryover from the days when flights between major cities routinely made intermediate stops.”

For example, a “direct” flight on Southwest from Denver to San Diego could stop along the way in Oakland or Los Angeles. 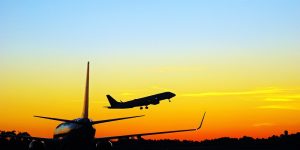 But even though you’re officially smarter, booking engines and airlines don’t really expect you to know the difference. When booking a flight from point A to B, you’re likely to be shown any stops — whether on a direct flight or through connecting flights — on the available itineraries.